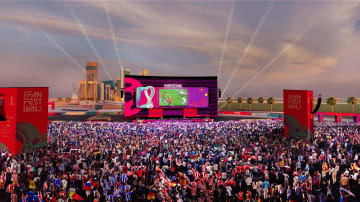 A multi-song collection featuring international artists across a variety of musical genres delivering smash hits. All these voices are harmonized together. This collection shows how music and football can unite the world. The soundtrack taken is as follows -Hayya Hayya – Trinidad Cardona, Davido, and Ayesha. Light the Sky – by Rahma, Balkis, Nora and Manali

The teams participating in FIFA World Cup Qatar 2022 are as follows:-

The wait for the FIFA World Cup is over! The final draw and group of the FIFA World Cup 2022 is out. Spain and Germany are placed together with Japan in Group E making it the toughest group. Belgium and Croatia are in Group G with Serbia and Cameroon, and Portugal and Uruguay are in Group H with Ghana and Korea. Similarly there is another group which you can see in the above group table.

So let us know a grand final draw for FIFA World Cup Qatar 2022 followed by final tournament match schedule which is published on FIFA World Cup.
Given the compact nature of Qatar, event organizers have been able to offer group stage games and kick-off times at the stadium for each match day after the first draw. The match schedule has been optimized for the benefit and comfort of the spectators. Teams, media and a global audience.
A total of 64 games will be played to decide the winners of the FIFA World Cup Qatar 2022™.